The Purchasing Managers' Index™ (PMI™) survey data for Qatar showed that non-energy private sector business conditions faced disruption in March as restrictions on travel and business activities were abruptly put in place as a result of the global coronavirus outbreak. The headline PMI, which tracks real-time business metrics, fell for only the third time in eight months to its lowest level since August 2019. As elsewhere in the world, indicators for output, new orders and purchasing all dropped sharply from their February levels and the 12-month outlook for total activity moderated further, reflecting great uncertainty surrounding the global economic impact of the coronavirus outbreak. More positively, employment in the Qatari non-energy private sector economy rose for the second month running, with the manufacturing and wholesale & retail sectors boosting job creation.

The Qatar PMI indices are compiled from survey responses from a panel of around 400 private sector companies. The panel covers the manufacturing, construction, wholesale, retail and services sectors, and reflects the structure of the non-energy economy according to official national accounts data.

Driven by the onset of the novel coronavirus, the PMI fell to 46.6 in March from 49.3 in February, the lowest reading since August 2019 and below the three-year long-run trend level of 49.8. Overall business conditions had previously recovered in the first two months of 2020 from a soft patch in the middle of last year. Data for January and February were signalling the strongest quarterly performance since Q1 2019, but the weak March figure resulting from the virus-related disruption brought the Q1 PMI average down to 48.2, little-changed from 48.3 in Q4 2019 but still higher than Q3 2019 (46.9). At the sub-sector level, manufacturing posted the strongest overall performance in March, and services the weakest. This is in line with reports that key sections of the economy, including industrial facilities in Ras Laffan, have been able to continue production as usual. Services, however, have been directly affected by government-mandated shutdowns that are in the interest of maintaining public health.

The monthly PMI can be aggregated to a quarterly average to enable comparisons with official gross domestic product (GDP). Since the survey began in April 2017 the quarterly PMI has a correlation of 0.90 with the year-on-year percentage change in GDP in real terms. Before March's decline the PMI had trended noticeably higher since last July, suggesting that GDP had recovered following a year-on-year decline of 1.4% in the second quarter of 2019. The most recent quarterly PMI reading for Qatar of 48.2 in Q1 is consistent with a 0.4% annual decline in total GDP.

Whereas PMI readings fell due to slower current and future orders, several underlying improvements couched the fall in the headline figure. The new orders and output sub-components had the biggest downward influences on the headline PMI, at -1.9 and -1.3 points respectively. These were partly offset by slightly positive contributions from the employment, stocks of purchases and suppliers' delivery times indices, with the latter inverted for the PMI calculation. In normal circumstances, longer times are associated with rising demand, whereas the lengthening in March reflected disruption to global supply chains from the coronavirus outbreak. 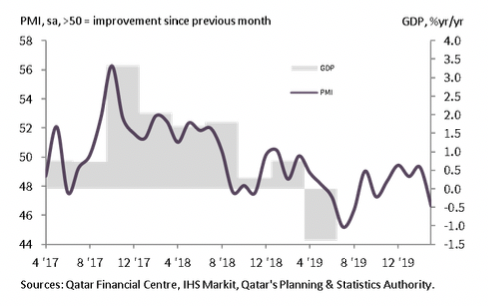 The accelerating global coronavirus outbreak interrupted the recent upward momentum of the Qatari non-energy private sector economy in March, according to the latest PMI data. The PMI ended the first quarter with an average reading of 48.2, broadly in line with the final quarter of 2019. Without the disruption in March, the PMI trend for the first quarter would have been the strongest in over a year. With great uncertainty surrounding the long-term impact of the outbreak on the global economy, firms' expectations for activity were broadly neutral in March. More positively, employment increased further and prices charged for goods and services rose at the fastest rate since January 2018.