Employment continues to grow as output expectations strengthen in February 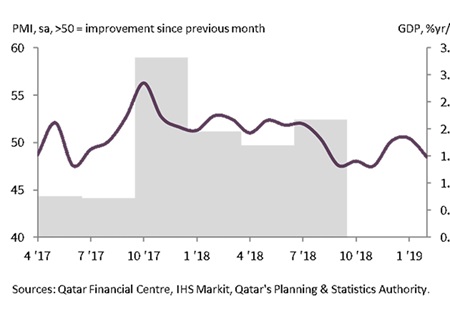 "February was another positive month for the Qatari private sector labour market, with employment increasing further on the back of January's strong recruitment. Sustained workforce growth suggests firms are gearing up for greater workloads in the coming months, which is reflected in the forward-looking business expectations index being at its second-highest level yet recorded. 71% of survey respondents expect activity to rise over the next 12 months. While the underlying trend signifies resurgent growth, particularly compared to the 4th quarter of 2018, February's PMI reading registered a slight dip from January's 6- month high."

Business expectations remained strongly positive in February. The Future Output Index rose sharply to the second-highest level since the survey started in April 2017, below only December 2018's peak. Around 71% of firms are forecasting growth, linked to expected new projects, new clients, new bids being approved and World Cup-related work.


The PMI survey is compiled for the Qatar Financial Centre by IHS Markit, and has been conducted since April 2017. The report provides an early indication of operating conditions in Qatar. The headline figure derived from the survey is the Purchasing Managers' Index™ (PMI™), readings of which above 50.0 signals an improvement in business conditions on the previous month, while readings below 50.0 show a tightening.

The PMI is calculated from five indices for output, new orders, employment, suppliers' delivery times and stocks of purchases. The index dipped to 48.5 in February from January's six-month high of 50.5. This mainly reflected a slower rate of employment growth following January's record gain (accounting for 0.9 points of the 2-point drop) and also a slight dip in stocks of purchases (-0.4 points) – again following a record rise in January. The indicator for short-term output was broadly stable, while new orders (-0.5 points) and suppliers' delivery times (-0.2 points) had negative contributions to the headline figure (the latter index is inverted for the PMI calculation).

*When inferring changes in official economic growth figures, it should be noted that comparisons with official GDP data for Qatar suggest that the Qatar PMI needs to fall significantly below 50.0 for a sustained period before a contraction of the economy is signaled, a relationship also observed in other fast-growing economies such as China and India. Precise estimates are impeded for Qatar by the short time span of both GDP and PMI data currently available for comparison. Since July 2018 the PMI has trended at 49.3, broadly equivalent to 3.7% annual growth in non-mining GDP.

Higher employment remained a theme in the latest survey. Having added staff in January at the fastest rate since the survey began in April 2017, a further increase was noted in February, albeit at a slower pace.

Average input prices increased at a faster rate in February, albeit one that remained below the survey average since April 2017. Purchase price inflation remained relatively weak, while staff costs rose at a stronger pace than the series trend. Companies continued to cut their own prices charged for goods and services. This, combined with higher staff costs, suggests downward pressure on margins.