The latest Purchasing Managers’ Index™ (PMI™) survey data from Qatar Financial Centre and IHS Markit signalled a strengthening rate of expansion in the non-energy private sector economy in January. Growth rates for both business activity and new business accelerated notably during the month and were among the sharpest registered since the survey began in April 2017. Evidence of a sustained recovery was apparent as the non-oil sector geared up hiring for the longest period in the PMI’s history. Employment growth was maintained for a survey-record equalling fourth straight month, and expectations for output remained positive. January data also signalled lower average input prices, enabling firms to reduce their selling prices slightly.

The Qatar PMI indices are compiled from survey responses from a panel of around 400 private sector companies. The panel covers the manufacturing, construction, wholesale, retail, and services sectors, and reflects the structure of the non-energy economy according to official national accounts data. The PMI rose from 51.8 in December to 53.9 in January, signalling the strongest overall improvement in non-energy business conditions in five months. Moreover, the PMI was at the fourth-highest level ever registered by the survey, below the peaks seen last July (59.8) and August (57.3) when the economy rebounded rapidly from the first wave of COVID-19, and lower than that recorded in October 2017 (56.3) when domestic production boomed after inducement generated by the blockade. In comparison, since the series began in April 2017 the PMI has trended at 49.7, registering current performance well above the norm.

Sub-sector PMI readings indicated that construction was the strongest-performing area in January (55.0), followed by manufacturing (54.8), wholesale & retail (53.0) and services (52.9) respectively. All four indices were above their Q4 2020 trends.

The 2.1-point rise in the headline PMI in January was generated by the two largest components: new orders and output. These both registered the third-fastest rates of expansion in the survey history, slower only than the rapid rebounds seen last July and August in the survey’s history. The employment and stocks of purchases components also had positive contributions to the PMI, but to slightly lesser degrees than in December. The final component, suppliers' delivery times, had a fractionally negative contribution to the PMI (although suppliers' delivery times improved during the month, this impact is inverted in the PMI calculation).

Companies reported a notable pick-up in customer numbers and new projects at the start of 2021. Outstanding business rose for the fourth successive month, although the increase was only modest as capacity was expanded. Purchasing activity rose for a survey-record seventh consecutive month, but supply chains proved resilient with input delivery times even improving slightly since December.

The monthly PMI can be aggregated to a quarterly average to enable comparisons with official gross domestic product (GDP). Since the survey began in April 2017 the quarterly PMI has a correlation of 0.26 with the year-on-year percentage change in GDP in real terms, with a PMI reading of 50.0 equating to a -0.5% fall on an annual basis. The latest official data reported a year-on-year decline of 4.5% in real terms in the third quarter of 2020, although the economy rebounded by 5.6% from the previous quarter. PMI data for the fourth quarter are consistent with a broadly stable year-on-year trend in GDP at -0.1%, while January data are equivalent to growth of 1.8%. 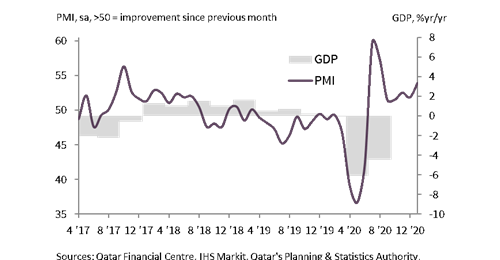 “The non-energy private sector of Qatar had a strong start to 2021, with the PMI rising sharply to 53.9. Outside of the July-August rebound seen last year, the latest figure was the highest ever recorded since October 2017. The upward momentum in the headline figure reflected the output and new orders components, which were both at the third-highest levels to date. Moreover, sector data signalled broad-based improvement with services seeing a notable boost at the start of the year, having been a comparative weak spot since the pandemic struck. I can confer that the service businesses I interact with at the QFC are able to conduct more activities and achieve greater outputs in the current environment.

“Although the latest GDP data (for the third quarter of last year) revealed a further contraction in the overall economy, recent PMI data suggest that the non-energy sector is now recovering strongly.”