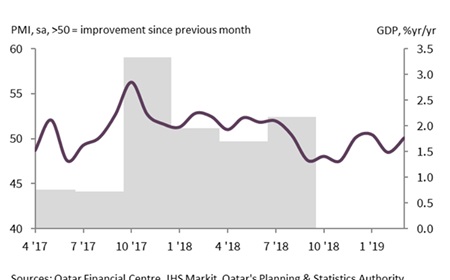 The latest PMI™ survey of Qatari non-hydrocarbon private sector businesses by Qatar Financial Centre highlighted a marked increase in the volume of new business. The rate of expansion was the fastest since August 2018, and sharper than the trend pace indicated since the survey began in April 2017.

“Intakes of new business boosted Qatar’s non-hydrocarbon private sector in March, with this indicator from the PMI survey at a seven-month high. Moreover, the month-on-month rise in the new business index, at 4.5 points, was the second-largest in nearly a year-and-a-half. This improvement in demand influenced companies’ expectations for total workloads, with the Future Activity Index rising to the second-highest level since the survey began in April 2017. Over the first quarter of 2019 Qatar’s PMI has trended higher compared with the final quarter of 2018; a period during which the global economy saw the softest expansion in over two years*.”

Overall confidence was the second-highest on record, with concurring reports from survey respondents of new project launches. Stronger inflows of new work helped to boost expectations regarding the 12-month outlook for growth of total business activity, with 80% of surveyed companies expecting output at their units to rise by March 2020. As a result, the Output Index registered a three-month high.

The uptick in business activity helped lift the headline PMI figure for Qatar from February's 48.5 to 50.1 in March. This improvement was reflected in new orders, higher output, lower stocks of purchases and suppliers' tighter delivery times (the latter index is inverted for the PMI calculation). The overall rise in the headline figure was slightly tempered by a weaker contribution from employment, however, which had registered a record high earlier in the quarter. As a whole, nonoil activity has resurged over the first quarter of 2019 with the PMI trending at 49.7, compared to the lower average recorded over the second half of 2018 (49.3).

When inferring possible changes to economic projections, readers should consider the short duration for which both PMI and GDP data has been collected. However, the trend PMI reading for Q1 2019 is broadly consistent with non-hydrocarbon GDP rising by 3.9% in real terms on an annual basis.

As a consequence of substantially higher new business orders, there was evidence of rising pressure on business capacity with the indicator for backlogs of work at an eight-month high.

The latest survey indicated an intensification of overall cost pressures faced by non-energy private sector firms. Average input prices increased at the fastest rate since March 2018. This mainly reflected non-staff costs – including shipping and customs charges, electricity and chemicals – as the indicator for wages and salaries indicated a slower increase in March. Companies continued to cut their own prices charged for goods and services, however. This pointed to further pressure on operating margins.